Types of Trees Found in and around Southampton

Nestled at almost the southernmost of England, Southampton lies just below Winchester, above Isle of Wight, and Portsmouth on the southeastern coast. Southampton is a city in England with distinct qualities and impressive character to boast off.

Known as the port city in England’s south coast, Southampton is known for being the city where the infamous Titanic departed in 1912. An interactive model of the great ship can be found in the SeaCity Museum. While Titanic is not the only point of reference making Southampton prominent, it thus is key to the city’s unforgettable history. But more than this, Southampton has an impressive lush of greens, eligible to be called the green city.

The legacy of a city is sometimes not all about the events that happened there but of its physical features. As for Southampton, it is a haven for trees. You can still find the old known trees around the city and discover how they survive through time.

While trees in parallel to life imply longevity, they are an asset to a city and are an evidence of life that traced back to the ancient times. This coastal town in the south of England prides itself with wide patches of green land and national parks that reunite you with nature.

Get to Know the Trees in Southampton

Southampton is home to some tree species. Of the many tree species found around the world, Southampton in the UK is only one location so small that it shares the percentage of tree population across the globe. Yet, these trees provide many benefits and offer the heritage that a certain location could be proud of.

It is simply wonderful to know that Southampton is home to many of these interesting old trees. Estate trees lined up a road even when the original homes were gone to a certain area. And when Autumn arrives, the leaves of these beautiful trees will turn into their distinct and vibrant colours adding luster to life and to the ground they stood.

Trees provide us the history of life. They are the perfect witness to millenia and centuries of civilization. Even before gardening and landscaping were alive, these trees will help us return to our roots and appreciate the benefits we get in many ways.

Get to know more about trees, other than just they are producers of food or beautiful flowers, but how they become a part of our society. Call Alpine Tree Surgeons for more information, especially if you have spotted a giant sequoia on your property.

Will a Tree Die If You Cut Off Branches? The Most Common Types of Tree Surgery in Basingstoke

Do You Need to Hire Someone for a Stump Removal?

When Is the Best Time to Bring Down a Tree?

Getting Rid of Stumps: Remove or Grind? 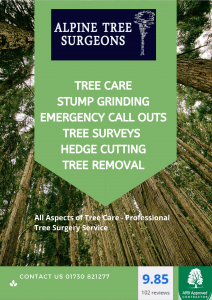